At the risk of looking like a knob, I really enjoy watching motivational videos and stuff like that. Particularly when I'm feeling lazy, and....unmotivated....

I think one of the traps with those types of videos is that you sit down with the intention of watching one, to kick you in the ass and get you moving, and then like with anything else on YouTube, you end up watching 3 hours of them and not getting anything done. I try to treat them like a 5 hour energy. Just a quick pick me up. Because if I start clicking the "next video" links, I'll fall down that worm hole every time.

Anyways, one of the most popular folks in that field these days is Gary Vaynerchuk. I know there are a lot of people out there that don't particularly care for him, but I like his stuff. He talks openly about his dream of buying the New York Jets, and constantly hammers home his message of "work work work". He's a rich, rich, man. Honestly, I could take or leave the "get rich by working hard stuff". I don't want to be rich. But he said something in a video I watched the other day that motivated me to write this blog. I'm paraphrasing, but it was something like:

"People hear me talk about wanting to buy the Jets, and I think sometimes they take the wrong message away from it. You don't need to compare your dreams or your goals to anybody else's. My dream is to buy an NFL team. If your dream is to work for yourself, or take a trip to England, or to lose 30 lbs or 300 lbs or whatever, that's fine. Figure out what will make you happy, and go get that. Don't make it you're goal to get rich just because it's someone else's. Otherwise, someday you'll get rich and you'll just be miserable with a bunch of money."

I have zero aspirations to get rich. The idea of having a 7 or 8 figure bank account that comes with a 7 day/70 hour work week makes me miserable. I just want to be able to tell jokes in exchange for a comfortable living. I want enough money to eat, and travel with Shay. Freedom drives me more than anything on this planet. I know other comics that have goals of being famous, getting on tv, making the big money. I respect that, and I hope they make it. But I see one of them get a gig that will help them get closer to those goals, and I can't help but get jealous. And I have to ask myself, "what do you care?" It's because I'm comparing my goals to theirs, and feeling like I should be trying to accomplish what they're trying to accomplish. Fuck that. I just have to put my head down and work on what I want.

(Maybe that's not why I get jealous at all. Maybe I'm just an ego-maniac, I dunno.)

I'm getting better and better on just focusing on what I enjoy, and what makes me happy. It doesn't matter what anyone else thinks. I produce my podcast every week because I enjoy it. It doesn't get thousands of downloads, and it probably never will. It won't make me a ton of money. But it makes me happy.  This blog gets a couple hundred views when I update it. Good enough for me.

I just want to be a guy that pays his bills with jokes, and instead of having to go to an office every day I can spend my days booking shows, writing jokes, and working on things that interest me. That's the dream if you ask me.

"Hey Adam, I love your blog. When are you going to post a new one??"

Well, nobody, today's your lucky day. A new blog.

It's been a while, but it always is in between these things. Remember when I was gonna try and "blog once a week"? So dumb....

Anyways, in case by some small chance you WERE wondering why I haven't been posting more, I've been trying to really focus on my act. Frankly, as much as I like blogging, it takes a decent chunk of time out of my day, and there's not really any payoff from it. I've been trying to dedicate the time I'd spend working on this blog, or Youtube, or in some instances my podcast, on writing jokes and getting on stage. All those other projects are still things I'm interested in, but as my comedy schedule picks up, they just fall further down the priority depth chart. They aren't going away, they're just not important right now.

"Season 3" of my comedy career is officially underway, and as I've mentioned before, my big goal for the next 12 months is to make the transition and become a full time comedian. No more day job. I either tell jokes or I starve (or ask Shaley to buy me something to eat). With that goal in mind, I've really been pounding the pavement, looking for work and stage time. I set a personal best for shows in a month in February, and now my goal going forward is to top that number every month if possible. Stage time is to a comedian what the gym is to a.....gym.....guy? The more time you spend on/in it, the funnier/stronger you become.

I've also really doubled down on my writing. I used to write quite a bit, but admittedly, once I hit a  point where I could comfortably do 30 minutes on stage (which is kind of the magic number to get road work as an opening act in this business), I kind of took my foot of the gas. Not a good business plan. I went on the road with my buddy Brent Ayton recently, and we had back to back shows where we co-featured, and did 45 minutes each. They were really fun shows, but one of the highlights for me was watching Brent tell his jokes for 3/4 of an hour. Brent is a notoriously good writer, and he works harder at it than almost anyone I know. And although he considers us equals as far as comedy goes, I look up to him. His writing ability and work ethic are inspiring, and they motivate me to become better as a comic.

So, I'm writing more. I've transferred all of my "finished" bits into a new book (I have about 10 notebooks full of joke ideas and bits), and I regularly read through it, looking for ways to add in a joke here, and take out something that isn't funny there. In addition, I have 5 or 6 new bits I'm working on right now, all to various levels of success. Going on stage with new material can be rough, but trying out a new joke and realizing it works is simply one of the best feelings in comedy. It motivates you to keep going, keep digging, until you fid that next bit that works. It's kind of like mining, and you never know when you'll find gold. Or oil. Or whatever people mine for. 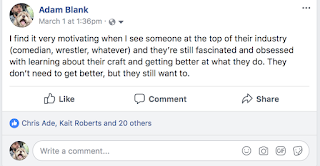 And it's true. When I see a comedian that is further up the ladder than I am, be it a local headliner, a touring comic, Jerry Seinfeld, whoever, and they want to keep getting better, it really kicks me in the ass. If they have that eye of the tiger, I should too. The minute you stop working at trying to get better, someone else passes you. I try not to compare myself to other comics, but I also know there's only so much room at the table. If I take my time getting there, someone else is going to take my seat.  So put Twitter down and get back to work!

Anyways, I guess that's it. That's why my posts on here are rare and spaced out. I really need to put the blinders (or blinder, anyway), and focus on my act. The blog, Youtube, and all that stuff will be there when I have time, but for now, I have work to do.

Thanks for reading, and supporting me, if you have. If you want me to fail, that's cool too. I don't care.