Belly flopping into the stand up comedy pool

Eleven days ago, I attempted stand up comedy for the first time in my life. Including that night, I've been in front of a microphone 4 times, for a grand total of 20:00 of experience as a comedian. It's not a lot of time, but it's been more than enough to teach me 2 things:
1) Being a comedian is A LOT harder than it looks.
B) I fucking love doing stand up.
I've wanted to try stand up for a long time, probably since high school (fifteen years.....I'm an old man), but I didn't get around to it until a couple weeks ago. Why did it take so long? I'd like to say I was too scared to try it, and finally worked up the nerve. But the truth is I was just too lazy to get off my ass and go to an open mic. We'd go to comedy shows, and every time, I'd walk out talking about how much I want to try that. But it was one of many things that I kept taking about trying. And then I'd go home and play video games.
Finally, a couple years ago, I decided to start trying all those things I talked about doing, but just kept putting off. I got involved with Big Brothers/Big Sisters (which is fantastic, I highly recommend it to anyone thinking about it). I took up golf, which 5 or 6 broken clubs and 300 lost balls later, I can call one of my hobbies. And I started taking French lessons. I found that the more I started trying new things, the more new things I wanted to to try. And that mentality eventually found me on a stage, in a room full of (almost entirely) strangers, attempting to be funny.
And I was funny. Kinda. I didn't get booed anyway. I made it through my 5 minutes, and had one of the best experiences of my life.
One of the best, and one of the most nerve wracking. I worked so hard to get ready for that night. I wrote and wrote. I drove around on my forklift at work practicing every day. Shaley (my substantially better half) knew my set as well as I did, she had heard me rehearse it so many times. When you go watch a comedian, they make it look so natural and easy, like they're just coming up with jokes off the top of their head. But when you're the person that has to go up there and tell the jokes, you realize just how hard a comedian works to prepare for a performance. It's crazy. I respected them before, but that level of respect has been multiplied by 10 now that I've been on that side of those bright lights.
I was so nervous that night. But I wasn't worried about getting on stage. I didn't know if my set would get any laughs, but that wasn't a huge deal to me. I knew I had worked hard enough, that if I bombed, it wouldn't be due to a lack of effort. I was going in trying my best. What scared me was the thought of getting up there, and not liking it as much as I always dreamed I would. That it wouldn't be as fun as I had always it looked like it would be. Luckily, it turned out to be even better than I could have hoped. By no stretch of the imagination did I kill it that night (honestly, I've listened to recordings of all of my sets so far, and I hate them all), but that doesn't matter to me. What matters is that from the first time I got the crowd to laugh, I knew I loved going up there, I feel like it's something I've been preparing for my whole life, and that it's something I'm ready to bust my ass to get good at.
The comedian community in Edmonton is incredibly welcoming and supportive. In just my week and half, I've been given loads of valuable advice from a bunch of different performers. Some people have even gone out of there to say something positive and encouraging to me. Lars Callieou, Ryan Short, Jamee Nall, and Shawn Gramiak are a few of the many people that have taken the time to talk to me and help me feel more comfortable, and their kind words and positive feedback has meant the world to me. Nobody in this business has any obligation to give a guy as green as me the time of day, and they, along with others, have re-enforced my belief that this is something I'm ready to dive head first into.
The support I've received from my friends and family has been incredible, too. I've always liked trying to make the people closest to me laugh, but taking on a crowd of strangers is a whole different game. To know I have as many people behind me as I do is invaluable. And to those of you that have asked if you can come out and watch/heckle me, I just ask that you wait until I don't suck anymore. You have enough to make fun of me about already.
Shaley, you've been awesome, listening to the same jokes over and over again. Thanks for believing in me, pushing me to try this, and telling me when a joke sucks. I love you.
I don't know how often I'll post on here, I just felt like writing about the past ten days, and I can't find my diary. I'm mad that I waited this long to try stand up comedy, but now that I've started, I spend almost all of my time thinking/obsessing over it. If there's something you've always wanted to try, just fucking do it. Because even if it sucks, and you hate it, and it's a total let down, you can move on to the next thing, instead of wasting time wondering "what if?".
"You guys have been awesome, thank you very much!" 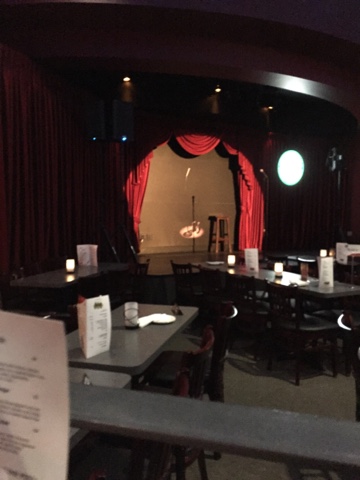