Get better, or get bitter

As I type this, it's Tuesday morning, and I'm on my first holiday in about a year. Total staycation, but much needed. Too many long days at work combined with late nights have my batteries as low as they've been in a long time. So I'm sitting on my deck, playing poker and writing this (FOR THE SECOND TIME. DAMN YOU INTERNET)
I had a show Friday, did a set at the Druid Sunday, won my second (yes!) Battle to the Funny Bone last night, and I'm on Scott's Mass Debate show this evening, which brings me with 5 shows of my 50th set. Baby steps in the world of comedy, but if you told me at the beginning of the year I'd have performed stand up 50 times by July, I wouldn't have believed it. My goal is to reach 125 by my one year anniversary in January. Should be close. Stage time is a little harder to come by in the Summer, but luckily I keep finding a couple spots a week, thanks to all the comics here in Edmonton willing to give me a place on their shows. It is mucho appreciated.
I was talking with a veteran comic the other day, and I just started picking his brain in regards to how to start climbing the comedy ladder. At 5 months and 50 sets, I'm still a pawn on the comedy chess board, and I'm in no hurry to move up. But eventually that's still my goal. One of the things he told me is "get better, or get bitter". I think it applies to almost anything you're doing in life, and it's sound advice. If someone is at a level you want to be it, you can either  put in the work they've put in to get where they are, or you can complain about not being there yourself.
The best way to get better at anything is to challenge yourself. I've been lucky enough to tell jokes to some awesome crowds, and I've stared down some absolutely cut throat ones. The good ones are what makes this so fun, but I actually really enjoy the tough crowds, too. Because that's where you get better. In any walk of life, getting knocked down and pulling yourself back up is going to make you much harder to knock down again. The path of least resistance is the path of least result. Be a glutton for punishment, embrace a challenge, and use it to get better. The people that are where you want to be pushed through the hard times and used them to reach the top. The ones avoiding the hard stuff are the ones standing there beside you, complaining.
If you want it, go get it. Get better, or get bitter.
(This was a better blog yesterday morning, but it disappeared of the face of the Internet. Still makes the same point. Thanks for reading this!) 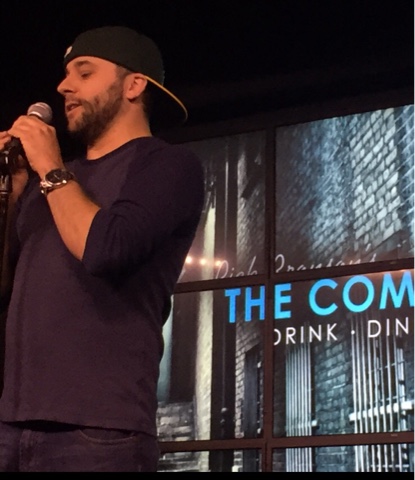