My last (only) blog post was a couple months ago, and it was a look back at my first 10 days as a comedian. I was inexperienced and naive when I wrote it. I'm a grizzled vet with 10 WEEKS of experience now!
I've done 16 sets in the last 2 months and change. I know it isn't a lot, but it's 16 more than I preformed in the 32 years previous. I mentioned in my first post how much I'd enjoyed my first few trips up to the mic, and I'm happy to say that a couple months later, that love for getting on stage has only grown stronger.  Exponentially.
While I certainly don't think I'm the best comedian in the city, (or on a single show I've performed on for that matter), I do think I'm better than I was in January. I've spent countless hours writing and re-writing jokes and listening to my earlier sets; which can be a painful, painful experience. And I feel like that work is slowly paying off. Stand up comedy is something that can humble anybody in 5 minutes, a lesson I've learned the hard way, repeatedly. But I've never gone into any show or open mic with the mentality that I was a lock to kill it that night. I've gone into each show with the mentality that I just want to be a little bit better than I was last time. I'd say I'm batting about .500 on that goal. It's a start....
While I'm not prepared to say I'm a good comedian, I am confident when I say that I think I can become a good comedian. I'm happy with my efforts away from the shows, writing, rehearsing, etc. I am, however, not happy with my stage time, and my efforts at obtaining more of it. Part of that is out of my hands; there are a lot of very passionate and talented comedians in this city, and only so many opportunities to get on stage.
But part of it is me either convincing myself that I'm too tired to go out that night, or my work hours not allowing me to make it to a show. I made the decision that I was going to change both of those things. My job has recently moved me to a 5am-2pm shift. Which means I won't get as much sleep, but the door is wide open to go to just about any show I want to. That means it just comes down to me and how passionate I am about this. (Surviving those Sunday night Druid shows - 4 am Monday alarms will be a great way to prove to myself I want this as bad as I think I do).
I've made a list of goals that I'm determined to accomplish in comedy. I truly believe I'll reach them, it's just going to take hard work. And when you're passionate enough about something, hard work becomes pretty tolerable. Some of those goals include:
Headline a show.
Travel to perform comedy.
Finish a second project (comedy related) that I've been working on for a few months.
These, among several other personal objectives, will hopefully, potentially, lead me to my ultimate goal:
Have the opportunity to leave my job and tell jokes instead.
I don't think I'll achieve all this tomorrow, or this Summer, or in a year. I don't know how long it'll take. But I'm bound and determined to make them happen. You want something bad enough, and you're willing to work for it, there's nothing you can't do.
Like I said, this city is full of awesome comedians, and having the chance to get to know some of them has been fantastic. The way they support each other, and their willingness to help and work with the new comedians like me, has been invaluable. I'm happy to be able to call them peers, and more importantly friends, and I hope that list grows over time.
Thanks a lot to all my friends, and particularly my family for coming to my shows and supporting me. Shaley, you've been incredible, putting up with me and hearing my jokes over and over again. And getting to perform stand up in front of my Mom and Dad for the first time was one of the biggest thrills of my life.
The say a journey of a thousand miles begins with a single step. I've taken 16 steps. So....what is that? Like, 999.9 miles to go!
Adam _____ 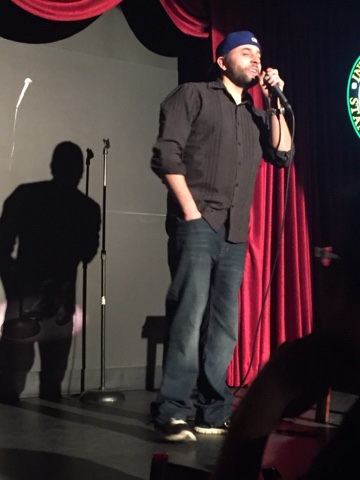