Since the last blog, a bunch of cool stuff has happened. First and foremost, we sold our house! We've been working on it for a while, and were really excited about the prospect of a new place, downsizing a little, and leaving ourselves more money to travel and do the things we want to do. We move out of our current place in about a week and a half, and while we've had some great times here, I can't wait for a fresh start. Shay and I aren't the same people we were when we bought this place 5 years ago, professionally or personally. I think our new place signifies that. It's a new chapter for both of us, and we're pretty excited!

Obviously, a big part of getting ready to move, is packing. Ugh. You don't realize how much stuff you have until you need to pack it all up and move it. But that's been another thing about this move that has me excited. I've gotten rid of a TON of stuff. A vast majority of my memorabilia collection, old video games, all kinds of stuff. There's nothing wrong with any of it, it just isn't where my priorities lie anymore. I feel like my life is getting decluttered, like a desk that was covered in paperwork getting cleaned up, and now I have more time, and room, to focus on what I want to focus on. And the list of stuff I want to focus on has shrunk to pretty well just consist of people I like (and a certain dog), and comedy.

As far as the comedy thing goes, it's been a fun month or so since I checked in on this thing. Funniest Person With a Day Job has come and gone, and while the result wasn't exactly what I wanted it to be, it was a great experience. I got to perform in front of some fantastic crowds, and I really feel like prepping for each round of that competition helped me find another gear as a comedy writer. I hadn't focused that hard on listening back to my sets, and trying to find ways to improve every joke before. I put so much pressure on myself to win that comp....I lost sleep, listened to sets and watched videos over and over again, and at the end of the day, I saw what could happen if I just focus and work hard. I've been doing my best to take that approach to my art ever since; I play my sets back while I drive home from shows now, instead of recording them just to never listen to them, and try to find openings to squeeze in an extra laugh or two everywhere I can. I'm fully aware that I have a long way to go, but I feel like I keep moving forward. That's all you can do.

(Side note: Brett Forte won Funniest Person. He's from Calgary, and if you're down there, I can't recommend checking out one of his shows enough. Funny, funny dude. He was actually gracious enough to reach out to me a couple days after the contest ended and ask if I'd like a chance to come down and close out one of the monthly shows he books/runs. So I'll be down there myself this Sunday, June 18th, if anyone is looking for something fun to do!) 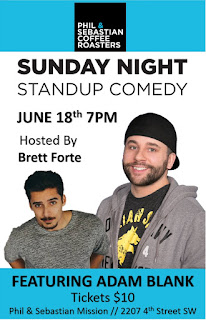 Other than the contest, I got my first opportunity to work a full weekend at The Comic Strip. I emcee'd for Alex Fortin, and our headliner, Derek Sequin. It was cool getting to work a weekend at a club I used to go to just to watch comedy and think about how cool it would be do be able to do that for a living. I have a weekend coming up at Yuk Yuks here in Edmonton, too, so that's pretty exciting.  I think my favourite thing about stand up is not knowing what's going to happen next. Just keep hitting open mic and writing, and eventually hard work pays off.

I guess that's it for now. I have some really cool stuff scheduled for the Fall, but I'll post more about that as the time gets closer. For now, life is good. Except packing. Packing fucking sucks.