It's been almost a month since I quit my job. As has been well documented on here, I really struggled with it at first. I'm starting to adjust to a new lifestyle, though. October was fantastic for comedy, being able to dive in head first and not worry about getting up at 4am every morning made it a lot easier to just relax and enjoy the ride. And it's been a sweet ride :)

Earlier in the month, I got to be a guest on Nick McQuik's podcast, "The Quik and Slow Comedy Show." I listen to it pretty regularly, and McQuik is a good dude, so I was pretty excited to get the chance to record it. I think we spent more time talking superheroes than we did comedy, but it was a lot of fun. Did you guys know Nightwing hit his dead and that's what killed him? Or something like that, anyways. DC sucks.

Speaking of podcasts, I finally got mine on the internets. You can listen to my annoying voice any time now! "The Comedy Odyssey" launched on October 8th, on iTunes and at comedyodyssey.podbean.com . It's been a real learning experience, not only learning how to record, edit, and upload a podcast, but how to interview someone as well. The show is pretty rough around the edges right now, but the feedback from friends and family has been fantastic. So thank you very, very much to everyone that has downloaded/listened to it. I promise to try and keep improving the quality of it, and I have a few guests upcoming that I'm really excited to talk to. 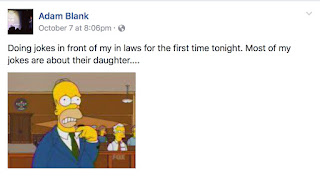 My girlfriend's folks came out this way for Thanksgiving, and I got a chance to tell jokes in front of them on one of my favourite stages, Chicago Joes here in the north end. We had a great time, they're really good people, and they've been nothing but supportive of me since I first got into comedy. I made sure to tell every single joke I had about their daughter :)


I got an opportunity to host the weekly "Battle to the Funny Bone" show at The Comic Strip in West Ed. The regular host, Ryan Short, was out of town, and he threw me a bone. The crowd that came out that night was outstanding, the battling comics killed, and Ken Hicks was the special guest helping me out. If you've never had a chance to check Ken out, you don't know what you're missing. Just one of those dudes you can't help but like. So big thanks to Ryan and the Strip for taking the chance on me. I really enjoy hosting, and it's something I hope to get more opportunities to do in the near future. Maybe I'll have to try and start my own room.......?

I spent some time on the road this month as well. I got to open for Lars Callieou in Fairview. We met some fantastic people out there. I'll be heading back up there in December with Mike Dambra, it should be a really good time. The next night, Lars and I got to do a show in Spruce Grove for their Chamber of Commerce Awards Gala. Big thank you to Lars and Norm Shaw for the opportunity, the crowd was incredible, and the room was great.


Then for the last week of October, I headed out to Thunder Bay with Lars and Ryan to kick off the opening weekend of a new club. We stopped over in Winnipeg on the way out, checked out the historic Rumour's Comedy Club, and got to do a spot at Ben Walker's open mic as well. It was a pleasure meeting some great Winnipeg comics, and a really fun show.

We checked out the Jets/Stars game Thursday night, and gave Ryan a crash course in hockey. I'm so glad that team's back. The atmosphere in the MTS Centre is crazy! I just need to check out games in Ottawa and Montreal (save the best for last!), and I'll have seen a game in every city in Canada. I don't have as much time to watch as I used to, but I love hockey. What the hell is up with the Oilers, too???

We picked up a Winnipeg comic, Carole Cunningham, and headed out to Thunder Bay Friday morning to kick off the first weekend of the Cricket's Comedy Club. We went on to put on 4 wicked awesome shows in 2 days. The club set up was rad, the crowds were RED hot, and we had some great chemistry on stage. The staff was great, and I can't thank Chris Mulawyshyn enough for having us. I really hope to get back out to your club again. We couldn't stop talking about how much we had on the shows. If you're in Thunder Bay, check it out! 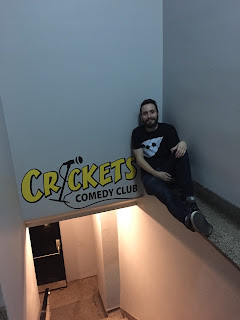 Lars Callieou took me along to do a guest spot on all those shows. In just 9 months of doing comedy, I've been to BC for the Okanagan Comedy Festival, done shows in Saskatchewan, Manitoba, and now Ontario. All because Lars gave me a chance to come along, work with him, and pick his brain. There are 50 other comedians in this city that could have gone instead, but I got the chance. I'm very humbled, and grateful to Lars for giving me an opportunity to start living a dream, and see what life is like as a pro comic. Some people might think this is me kissing ass, but anyone that really knows who I am know that that's not what I'm about. And frankly, I don't care what anyone thinks. I'm just a very appreciative person, who understands that nobody owes anyone anything in life. I'm proud to call Lars a colleague, and more importantly, a friend. I had more fun on that trip than I've had in a long time. Thanks guys.

Finally, on a note outside of comedy, a couple weeks after I left my job at the box factory, I got a call from Jack and Ken Cookson, asking if I would be interested in going back to work for their company, Pro Am Sports. They deal in sports memorabilia, and if you're into the hobby at all, you probably already know them. If not, you're missing out in the worst way. I don't just say that as an employee, and a friend, but as a collector myself. Their stuff is authentic, and top notch.

So that was my October. I took a massive chance when I left my old job, but I was miserable there, and I knew something had to change. I stayed positive, and now I'm in a spot where there isn't one part of my life I don't enjoy. Waking up excited every morning is a surreal feeling. When someone would ask how my day was going at my old job, my favourite response was "living the dream". It's still my go to answer, but now I actually mean it :)