I've tried to write this damned thing three times, and just haven't been able to make it work. It's been a busy few days, I haven't gotten a full night's sleep in a while, and just can't focus. So this might seem rambly, but.....bah. The world needs more rambling.

Fair warning: this is a LOT of rambling.

Since I started doing comedy in January, the Druid Comedy Night has become part of my weekly routine. I traditionally get pretty down on Sunday night, knowing work is right around the corner. I've hated them since I was a kid, when school was waiting for me in the morning. Having a comedy show to look forward to every week just made it easier. I said to one of the guys, it was like a reset button. It could be a rough week, you couldnt get a spot on a show to save your life, but you could always count on the Druid, and then start the next week fresh. A guaranteed chance to get on stage, and talk to the other comics. It was a sure thing. But after 7+ years, August 21, 2016 was the last Druid Comedy Night.

A lot of comics have been performing at the Druid for longer than I have. Some for the entire 7 year run. And I won't pretend to be as affected by the show's run ending as they are. But it doesn't matter if you've been doing comedy there for 7 months or 7 years, we're all on the same wavelength now; none of us know a time where there was comedy in Edmonton without the Druid. I hate being the new guy anywhere; work, school, a team. I've always banked on adapting by being the funny guy. Trying to fit in with a entire group of funny people wasn't easy. The time I spent at the Druid didn't just help me become a better comedian, but it gave me a chance to sit around and talk to a bunch of great people. It had the same feel a locker room does before a hockey game, we bonded like teammates do. It made me feel like part of the team.

That last show was one of those nights I'll never forget. I got there around 5:30, had a couple beers with the guys, and then the powers that be were kind enough to treat all of the comedians to an incredible steak dinner. We then got the chance to tell jokes in front of an absolutely sick crowd. It was special invite only, and people PACKED the Druid. It was shoulder to shoulder. Over 50 comedians, 7 hours. I got the honour of taking bullet (1st comedian to go up) on that show. I was one of the newest comedians on the list that night, and Lars had a dozen Druid veterans he could put in that spot, and he gave it to me. That's something I'm incredibly proud of, and humbled by. I finished my set, and hung around for the entire show, I got to watch so many great comics say goodbye to the stage we've all shared. It was an awesome night. Lars, Marko, and everyone else involved should be incredibly proud of the Druid Comedy Night. I said it at the end of my set, but I don't know if I would have gotten into stand up without that show and the support I received there. That stage changed my life.

Then this past week, I was on holidays. My nephew Ben flew in from BC to hang out with us, and it was like summer vacation as a kid again for a few days. Stay up late, play video games, and do something sweet in the afternoon. Trampoline Park, laser tag, the waterpark at West Ed, we had a really good time. And then Wednesday, we hit the road for BC. Originally our plan was to drive to Quesnel to visit my girlfriend's family, and take Ben home, but Lars offered me a spot at this year's Okanagan Comedy Festival. My girlfriend Shaley has been more supportive of my comedy dream than I could have ever hoped, and even though I said I should go visit her family, she insisted I go to the Festival. (Maybe she just needed a break from me). So she and Ben dropped me off in Kamloops, and they took off to visit her family. I got to hang out in Kamloops and Kelowna, and live the dream of being a full time comedian for a few days. I told jokes in front of some incredible audiences, and got a lot of time to drink beer and bond with some great comics. I met a ton of wicked people, including David Kopp, who runs Dakoda's Comedy Lounge in Kelowna. That room was awesome, check it out if you're ever out there. Thanks for having us guys, and  for giving me the chance to come along, Lars. It was a blast.

I also think I have a crush on the city of Kelowna. Absolutely beautiful.

Oh yeah, and I got to sleep in the same bed as Ryan Short and Kevin Light. Cross that off the bucket list.

So that's been my last 10 days. I'm home now, back to the grind of forklifting during the day, and telling jokes at night. With a little draw luck, I'll do my 100th set in September. I hate my day job as much as ever, but I love my night job so much that the day one barely even bothers me anymore, except for the 3:30 am alarm. I say it almost every blog, but if you want to try something, do it ASAP. I hope whatever it is makes you feel the way comedy makes me feel. Which is really, really good! 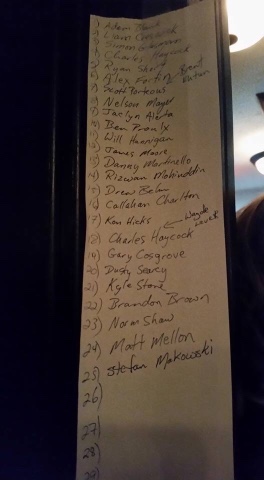 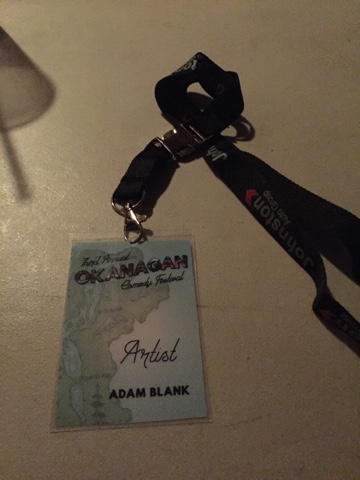 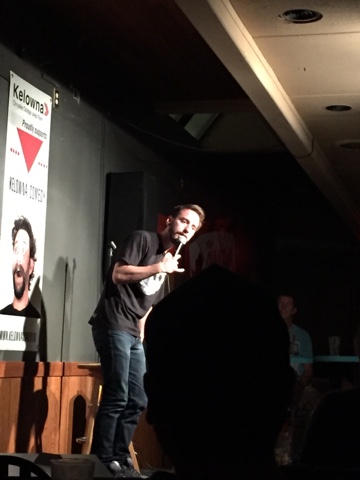 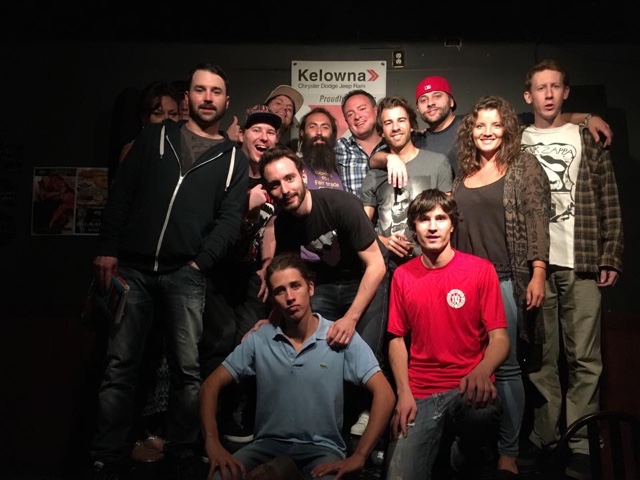